Extensive studies support scientific literature claiming that use of hydrophilic catheters reduce urethral trauma and urinary tract infections. This in turn can minimize the need for antibiotics. Because of these benefits, we now know that hydrophilic catheters are one of the most cost-effective ways to prevent long term urological complications in general and UTI in particular.

Effectiveness of hydrophilic coated catheters has been documented in the scientific literature and there is a general support that they reduce the risk of urological complications such as UTI and trauma (e.g. strictures, hematuria/ bleeding).4 5 7 8 For example, there are five recent meta-analyses available comparing efficacy between hydrophilic-coated and non-hydrophilic catheters9 10 11 12 3 concluding that use of hydrophilic catheters can reduce the risk of UTI by 16-64%9 10 11 12 3 13 and the risk of hematuria by 43%.12 Summarizing the literature some publications confirm this conclusion,4 5 7 12 14 15 16 17 18 19 20 while others claim that more evidence
is needed.1 5 9 10 21 22 23

Very few or none conclude the opposite. Comparing UTI incidences reported in the literature gives further support with figures between 40%-60% reported for single-use hydrophilic coated catheters as compared to figures around 70%-80% for non-coated catheters and/or catheter reuse.24

"With some instruction, all patients with bladder dysfunction can benefit from [intermittent catheterization] IC...2"

"The use of [hydrophilic-coated] HC catheters for intermittent catheterisation in SCI patients is highly cost effective. The outcome is consistent irrespective of whether UTI data are collected in hospital or community settings...11" 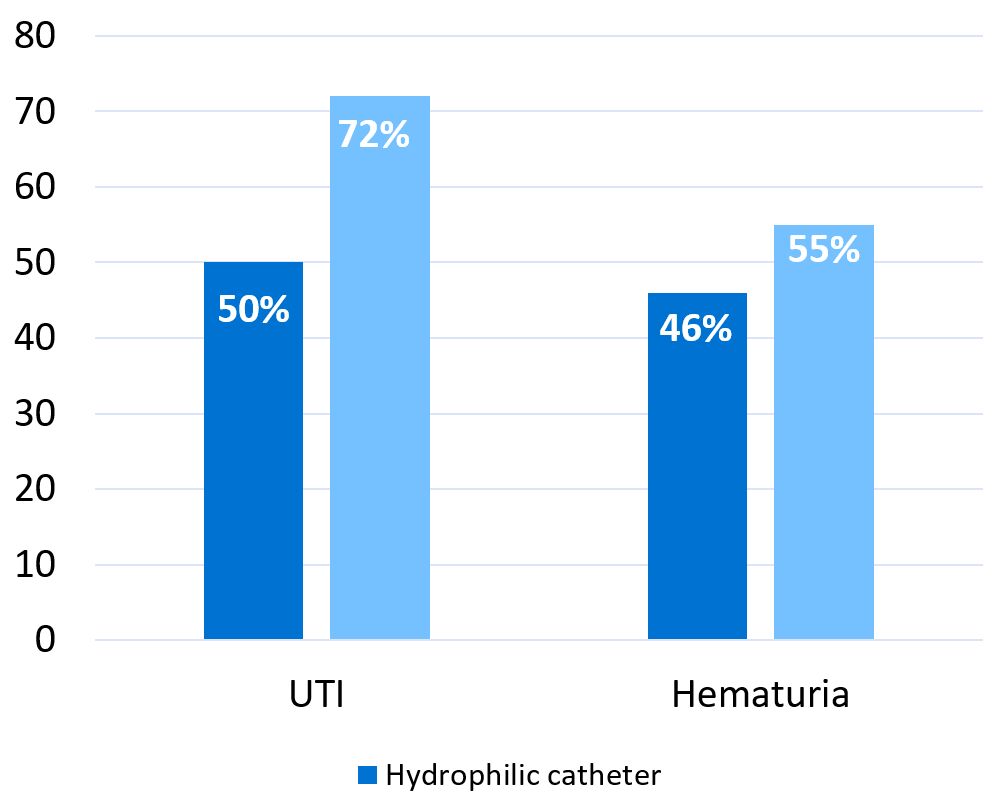 This meta-analysis combines five randomized controlled trials to create stronger evidence. A meta-analysis follows strict rules on how to search, select, validate, weigh and summarize studies specified in the PRISMA statement (Preferred Reporting Items for Systematic Reviews and Meta- analyses) and by the Cochrane Collaboration. The studies selected for the meta-analysis were all comparing hydrophilic-coated catheters to uncoated plastic catheter in spinal cord injured patients. The following studies were included:

The publication combines the results from the studies and concludes that UTI incidence was 49.6% in patients using hydrophilic catheters and 72.0% for patients using non-hydrophilic. The results for hematuria (bleeding) were 45.7% (hydrophilic) and 55.0% (non-hydrophilic) but for this comparison only four studies could be used. The results are expressed as ‘odds ratio’ and/or ‘odds’ which is a sort of approximation for risk. The odds ratio for UTI and hematuria decreased for patients on hydrophilic catheters as follows:

The figures above could be interpreted as using hydrophilic catheters, compared to non-hydrophilic ones, reduces the expected risk for UTI by 64% and hematuria by 43%.

"...hyrophilic catheter usage was associated with reduced numbers of treated UTIs as compared with standard non-hydrophilic catheters in persons with spinal cord injury...14"

This randomized controlled trial compared the use of LoFric to a non-coated plastic catheter for intermittent catheterization. The study included 62 patients, mainly with spinal cord injury, and the follow up period was 12 months. One patient was removed from analysis due to wrongful treatment and thirteen patients were lost during the follow up. Thus, 22 patients used LoFric for 12 months and 26 used non-coated plastic catheters for 12 months. In the hydrophilic-group, patients were given 120 catheters/month (4 per day) while in the PVC-group 30 catheters were given per month (1 per day) with the instructions to clean and reuse. The results showed twice as high hematuria score among the non-coated catheter users as compared to the hydrophilic-group where no significant hematuria was seen. Decrease in UTI rate in the hydrophilic-group was seen between baseline and follow up (0.44 to 0.14 monthly per patient). In the non-coated catheter group the UTI incidence remained more or less at the same level throughout the study (0.20 to 0.14 monthly per patient). The study reports of high patient satisfaction with LoFric catheters. The publication concludes that the use of hydrophilic catheters is associated with less hematuria and a decrease in the rate of UTI as compared to non-coated catheters. It proposes that patients with higher rate of UTI may bene t the most of hydrophilic catheters, and that the lower infection risk is a result of reduced urethral trauma.

"It seems reasonable and is indicated by our study that the hydrophilic catheter regimen has a preventive effect on urethral traumatic complications and that it can facilitate the healing of minor epithelial damage...6"